The use of steel chains or barbell chains in training is a logical addition to the use of rubber bands. Both of these tools basically pursue the same goal – to ensure the variability of the load and bring dynamics into common and familiar exercises.

Why do we need this?

First of all, we need to include some diversity into the training process. Sooner or later, all athletes of any kind of sport inevitably face a so-called “plateau” problem. It is a phenomenon that actively interferes with the continuity of training progress, especially when an athlete approaches the limit of his or her potential.

In those sports where the set of movements is very limited, any factor that can expand the methods of training is not only useful but sometimes vital. In powerlifting where there are only three basic exercises: bench press, deadlift, and squat, some specialized powerlifting chains, such as bench press chains, chains for squatting or deadlift chains can change the approach to training and working with weights.

So which training factors powerlifting chains can influence the most?

Have you ever had a problem when the move seems very easy at first, but at the top of the amplitude the bar appears static? At such moments, you may wish that the bar would be just a couple of pounds lighter. Well, the problem is that you cannot apply even force, you cannot extend your power across the whole amplitude. Barbell chains can help you to fix this problem, they can teach you how to distribute the energy correctly making the movement easier at the bottom but much more difficult at the top. The same goes for squats and deadlifts.

We have already discussed the situation when the athlete is not able to complete the movement. But not everybody realizes that it is not only the applied force matter but also the ability to provide sufficient impulse. To make it happen, at the lowest point, athletes must push their power over the edge blowing up their bodies so to speak. While training with chains, it’s easier to prepare an explosive impulse, both physically and mentally. Knowing that the weight will only increase, athletes can set themselves to accumulate the maximum possible effort from the very start of the movement.

Even though chains are heavy, their use may be very different from that of regular static weights. It may not seem obvious, but powerlifting chains can be utilized in the process of “lightweight” exercise on speed and intensity. It is unnecessary to load the barbell fully to feel the effect. Chains can be applied with less weight, but at a higher pace to increase the intensity but retain all of the advantages in the form of a balance and explosive power at the same time.

How heavy do you want your chains to be?

You may wonder how athletes can calculate the weight of chains they need. Well, here’s a little hint for you.

*All numbers are estimated, they are calculated based on your single-rep maximum 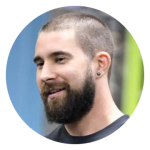 As a former professional weightlifter, Ben has come a long way in using a wide variety of equipment and training techniques, including weightlifting chains. His experience and knowledge is a valuable contribution to our team that can bring immense benefit to any visitor to his classes. Despite the image of a stern man, Ben actually demonstrates himself not only as a very understanding instructor, but also a cheerful and funny friend. If you have questions to Benjamin, just ask your question using the form.

After trying almost every existing piece of gear in powerlifting, chains exceeded all my expectations! You won’t believe how much they add to your workout. The variable resistance is awesome, a completely new feel.

I'm into chains since recently. I'm right in the middle of the cycle, so I can't tell anything about the results yet. But feels great!

If you've never done a bench press with chains, now's the time. For real. If you think you're good, than chains will prove you are wrong.